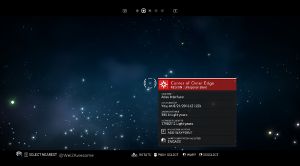 The Galactic Map displays all the Star systems that can be discovered and explored in the Galaxy that you are currently located. There is much to be desired in terms of navigational tools, but for now it's what we have to work with.

Modes
There are basically 5 modes or paths to aid with navigation:

iVc Navigators favor Free Exploration as it is possible to fly more direct from point to point, saving time and fuel. There is no compass or navigational aids so we rely on the big bright ball in the center of the galaxy as a fixed navigational beacon and divide galaxies in half with a vertical centerline that we refer to as Prime gHorizon and a horizontal centerline Prime gMeridian. All vertical space within each quadrant is referred to as gAltitude.

Understanding this concept is key to joining the ranks of experienced iVc Interlopers and using the Pilgrim Star Process to reach any coordinate in the galaxy.
The Galactic Map has a few other functions that are useful for navigating as well as exploring the skies.

Scanning
If there are systems that have been discovered they will appear on the Galactic Map after a Scan for discovery. This is very helpful when you have completed your navigation to the correct region using the Pilgrim Star Process and you need to identify a specific Star system.

Analysis
Clicking on any star on the Galactic Map will return an analysis that includes it's distance from you and the center of the galaxy. This information is helpful when honing in on a specific system as well as the obvious identification it provides.

Warping
Hyperdrive allows you to travel at lightspeed from system to system, across the galaxy. No Man's Sky will generate suggested routes of travel, but as iVc Navigators we like to forge our own path.

The iVc Navigator's procedure for warping is:

We repeat this until we either run out of Warp Cells or reach our destination. 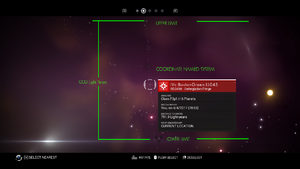 The InterGalactic Voyage Corridor (iVc Project) is a community-based effort to establish logistical support routes that assist players in their voyage to areas such as the Galactic Hub Project.
In the process of defining corridors we developed techniques for navigation and adopted procedures that make galactic travel possible.

The Pilgrim Star Process relies on the amazing web application / tool https://pahefu.github.io/pilgrimstarpath/ to chart a course for galactic navigation. Each iteration of the tool has improved the functionality and in our opinion, makes the skies worth navigating.

It is possible to drop Signal Boosters, chart your position on graph paper, and guestimate each movement but the Pilgrim Star Path is so complimentary to No Man's Sky that it really should be part of it. We recommend that every iVc Interloper, regardless of rank, use it and share it with others. 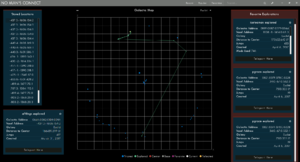 NMS Connect is a Coordinate Plotting App location manager that syncs your current game's coordinates, uploads them to a server and indexes a list of everyone's coordinates using the app. It also provides a map that plots your coordinates relative to the center of the galaxy and allows for teleporting to other players and saved coordinates.

Is it cheating? We're just a rowdy bunch of washed up pilots who spend their days playing video games and writing guides so we'll let your gaming morality be the judge.

Is it an incredible interface that has some amazing features... absolutely! As explorers of the galaxy we prefer plotting a course using the Pilgrim Star Path, but as iVc Navigators there are times when we need to teleport to a location on cue. Who's to say that won't be possible in a time when warping from system to system is as easy as a mouse click. Afterall, teleporting is part of almost all of the greatest sci-fi stories ever told.

Next up >>> IVC DESTINATIONS