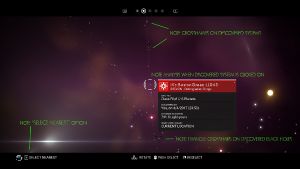 While No Man's Sky is not technically multiplayer it is possible to visit discoveries made by other players. Using the Scan for Discovery option anywhere in the galaxy while viewing the Galactic Map will initiate a search of local systems that have been discovered and highlight the stars with Discovery Marker crosshairs like the ones pictured. There is also an option to cycle through the discoveries.

The scan returns your own discoveries along with those of others, so it's best to search away from systems that you have discovered.

It's comforting to find pockets of the sky with various discoveries by multiple other players and scanning is very helpful when trying to locate a specific destination within a known Region. Once identified, scanned discoveries can also be viewed within your own Discoveries menu. NMS gives you the option to report offensive or inappropriate names there as well. Considering how large the field of play is in No Man's Sky, it is amazing how many destinations can be found by simply scanning the sky. If you are looking for a slow paced, exploratory mode of play then you will want to scan after every warp.

The primary mission of the iVc Project is to establish logistical support routes that assist players in their voyage across the universe of No Man's Sky.

The natural outcome of iVc Interlopers participating in the iVc Project is improved navigation ability within the field of play for all players. These systems not only serve as iVc Navigational Aids but as interesting destinations to explore.


It is not uncommon during galactic travel to enter a system, land on a planet, grab a coordinate and then simply move on without exploring or naming any of the Planets or Moons in the system. These systems are technically part of the iVc Project and represent a great opportunity for returned exploration. Here are a few with Galactic Coordinates for interested iVc Interlopers:

No Man's Sky is reported to be a mind-boggling open universe with over 18 quintillion planets that is indented to be a solo journey of discovery. Many, including the game's developer have said the chances of two players crossing paths was pretty much zero... but players had other plans in mind and many have not only reached the same destinations, but set up NMS Hubs. When a Traveller reaches this Civilized space one will typically find their Galactic Map light up with Discovery Markers.

While searching for the Galactic Hub Project player afWngs decided to start using a common naming convention to be able to aid in his own navigation that the idea of the iVc was born. Once the hub was discovered afWngs found it easier to help friends that were trying to find the hub by systems he named with their coordinates using Signal Boosters. After spending some time exploring and creating the first InterGalactic Voyage Corridor named iVc:BostonBlue near the hub afWngs opened the effort up to include anyone interested in the effort and launched the communal iVc Project.

The iVc Community set off to develop iVc:BostonGreen just before the void that extends to the center of the universe with the hopes of discovering the galactic hub No Man's Sky Love NMSL but was disappointed to find it is currently only hosted on the NMS PS4 Server. Although the NMSL hub is not currently populated on the NMS PC Server the Galactic Map around iVc:BostonGreen does light up with many individual user Discovery Markers and the area is ripe for a coordinated hub.

MAJOR SPOILER. The Galactic Center is currently a disappointment to most that visit it. The reason is becuase you enter a new Galaxy and basically start over from scratch. While this may disappoint some, it is a welcomed feature to an iVc Interloper since it opens another realm to navigate and discover. There is debate in the community as to whether or not you can return to your base in a previous galaxy and while it may be possible through the use of teleporting mods, it is does not appear to be possible through pure game environment. In addition, even when teleporting it appears the base is no longer there. Players have noted that it is possible to summon your Freighter to each Galaxy you visit.