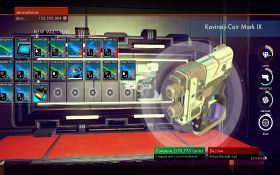 Kaviraiji-Cair Mark IX is one of the Multi-Tools in No Man's Sky.

It is white, aqua, and grey in color with white and orange stripes on the barrel, and purple inside the trigger guard.