Kinamish's Shimmering Auditor is a starship in No Man's Sky.

Kinamish's Shimmering Auditor is an Exotic-type starship in the No Man's Sky universe, found in the 33rd galaxy.

This starship has been documented by GenBra Space Corp, originally discovered by Cafe 42. 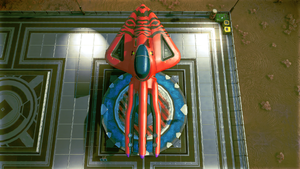 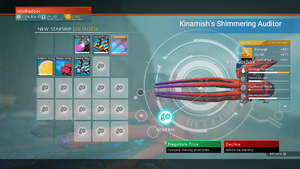 An S-class version of this starship was discovered in the 33 Calamari on the wall.. 42/33 system, located in the Caygnirat, Brogoweldian galaxy.

This ship showed up very soon. The system was originally named by Cafe 42 and was named after this Exotic Squid.