Kipt is a planet in No Man's Sky.

Kipt is a planet in the Jabberwocky Septimus star system on the PS4 version of No Man's Sky universe.

One of two extremely harsh planets in the Septimus system, Kipt is plagued with nearly unceasing dust storms. Visibility is severely limited and a traveler without an analysis visor could very easily become disoriented. The high temperatures of the day will lead to bitterly cold nights and provide no respite for the residents of the planet. 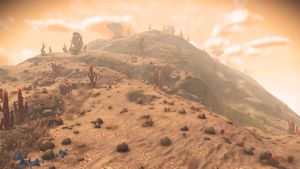 The storms on Kipt are severe and frequent, often limiting the visual distance to a few hundred meters

None known at this time 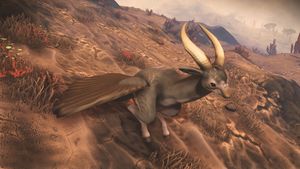 Y. Slashurustosa is a curious creature and has even been described as friendly, helping travelers find shelter during the extreme changes in temperature that can occur on Kipt