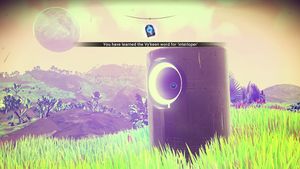 A Knowledge Stone grants players a new word in the alien language corresponding to the star system they are in, either Gek, Korvax, or Vy'keen.

Each stone can only be used a single time unless used for special interactions in missions, in which case the knowledge stones can be used again for their normal language interaction.

Using Analysis Visor shows them as Alien Artifact indicated with

They can be found randomly on planet surfaces, often near various waypoints. Each planet has its own invisible density value which determines the rate at which Knowledge Stones generate. On high-density planets, they may randomly spawn close together in groups of two or three. They are guaranteed to appear near ancient alien structures such as monoliths or ruins, with most typically having three nearby.

Knowledge stone-like features can also be found at the Atlas in the Atlas Interface. Upon being approached, they light up and a bubble of light flows up, accompanied by the chance of the player learning a new word.