100% of fauna have been discovered.

LM790's geography largely consists of rolling hills with occasional deep caves and sinkholes. The climate is radioactive but temperate both day and night and is not known to have storms.

LM790 is covered in a variety of extremophile plant life, including some bushes that extract Radon from the planet's atmosphere. The tops of the rocky hills lack much growth, but ruins and debris are often surrounded by drooping trees and large striped bushes.

Zinc is the most abundant resource on LM790, followed closely by Cave Marrow, which grows in large quantities near the open mouths of caves. An occasional Gamma Weed can be spotted as well. 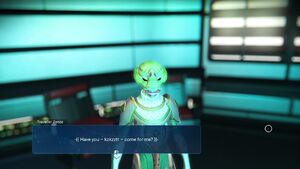 LM790 is has been densely colonized by the Gek, and many outposts, shelters, and monoliths can be found. One such colonist, Traveller Zonze, makes their home at Overtofi Station, near the site of two crashed freighters and a base. A Communications Station has been placed here so other travellers may find the location easily; the transmission tower at Overtofi Station should also direct visitors to the crashed freighters.

LM790 is home to the Friendly Spider Crab, a rare variation of the spider-crab species that is not a predator. It wanders the open areas of the planet in small family groups, and can be fed Iron to make it poo Coprite.