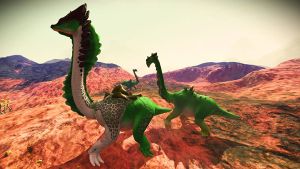 The Variussew Hierace, asymmetric gender in the foreground, alpha gender slightly in the background.

This dry and rocky planet is unforgiving, with its extreme heat and relative lack of flora. However, it is home to a wide variety of exotic fauna who thrive in spite of the harsh conditions. The most notable native species is Variussew Hierace, a ~6.1-6.2m diplo species. A number of geological resources, like Plutonium crystals or Radnox rocks, can also be found here.

Like all planets with megafauna diplos, this planet is considered one of the main attractions of the Galactic Hub. 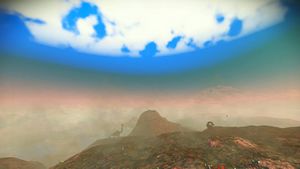