Lemon Day is a planet. 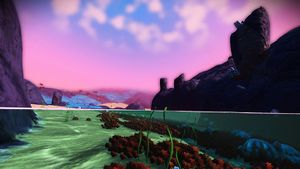 A view of the planet above and below the water line.

Lemon Day is a planet in the HUB7-K-149 Sugar Magnolia system.

HUB7-K-149 Sugar Magnolia can be located using the HMS.

The climate here is pleasant and habitable, ranging from -3.9 °C at night to 2.4 °C during the day. No inherent drain on exosuit systems.

Storms were not experienced over the course of two days of exploration, but they may still be present, just uncommon.

PS4: 92% (Remaining species is probably aquatic predator - water bodies are shallow on this planet, making such species difficult to locate.)

This planet is home to a total of 14 different species, with at least one species in each of the possible biomes (land, sea, caves, air). The most notable species are documented below.

This planet is carpeted in blue, square-top blades of grass. The grass changes color depending on the terrain it grows on, so purple grass is common as well, with other colors (like brown or grey) being less common. Most other flora species are dominantly red, green, or a mixture of both. Blue-green flowers are also commonly found all over the planet.