From No Man's Sky Wiki
(Redirected from Living Ship archetype)
Jump to: navigation, search
The subject of this article is from the Crossplay update.
The information from this article is is up-to-date as of 16 July, 2020. 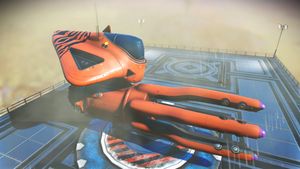 A Starship is the major means of travel in No Man's Sky.

Starships, or ships, play a major role in No Man's Sky. They are necessary for gameplay progression unless a player plans to stay on one planet the whole game. Starships allow players to travel between planets and solar systems, fight in space battles, engage in space encounters, reach the centre of the galaxy, store resources, and trade. The player begins the game with one starship and can acquire additional starships later, up to a maximum of six starships at any one time.

Players are not the only entities that use starships. NPC-controlled starships, including pirates and Sentinel Interceptors, populate the skies on planets as well as the interplanetary space within star systems. In addition to acting as a primary source of new starships, NPC starships carry valuable resources and products for sale, and they can be followed to locate certain inhabited points of interest.

Due to the static nature of the seed in No Man's Sky, a well documented ship will always be able to be found again. A system that spawns a rare design - for example an exotic - in its first armada landing on a space station or trade port will always do so on revisit or reload. The same goes for the wait timers on stations or ports until a ship type shows up. If a particular ship has piqued your interest, finding a station or port it lands on as part of the first group is the best grinding spot.

All ships are defined by the following main aspects:

All of these can be upgraded with technology blueprints. These aspects can also have modifiers based on a ship's type and class (see below). 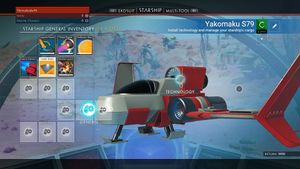 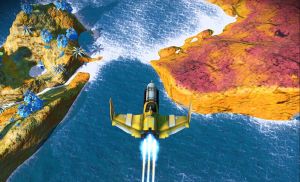 Into the wild blue yonder

There are six types of starships: Shuttle, Fighter, Hauler, Explorer, Exotic, and Living Ship. Among these archetypes are four letter-grade classes: C, B, A, and S.

Every star system has 21 different ship designs: 7 shuttle types, 3 ships of each specialist type (Fighter, Hauler, or Explorer), 1 Exotic, and 4 other specialist ships based on that system's dominant race. S-class ships will spawn more often in rich economies. Note that a ship's properties are randomized each time it lands. The only consistency is in the design and thus tier. If you are already in a wealthy system, it can be beneficial to wait for your favorite design to have a good dice roll. During multiplayer an NPC ship can have a different class for each player. The properties are rolled for each one individually.

Spawn chances based on economy: 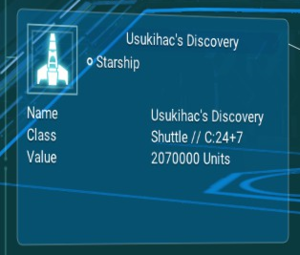 Each type of ship has three tiers of inventory sizes: a small, medium, and large, though Shuttles do not have a large size inventory. The sizes can be identified by the style of wings (or the size of the fuselage for the Shuttle) or by scanning the ship using the Analysis Visor. (See images below to identify traits of ships with large inventory as well as how to interpret Analysis Visor output.) The archetypes and their major differences are as follows: 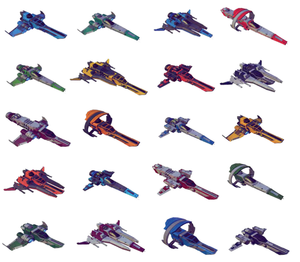 Images of a few ships

Ships of this type have balanced stats, with no significant class bonus compared to the other archetypes. These ships look typically blocky with a rectangular canopy, but some ships in this class have a tubular fuselage. Shuttles do not have a large inventory tier, but are great for starter travelers due to their cheap cost and increased low-tier inventory space. 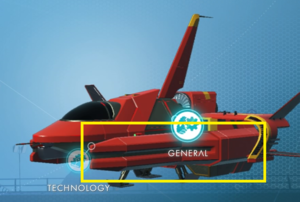 Ships of this type feature a damage potential class bonus. These ships are the mascot ships of No Man's Sky, and are also the primary starships of pirates across the galaxy.

These ships are more commonly found in Vy'keen systems.

Ships of this type feature a hyperdrive range class bonus. These ships usually feature abstract shapes connected together with many thin, slender pieces with smooth surface, giving it insectoid or arthropodic look.

These ships are more commonly found in Korvax systems. 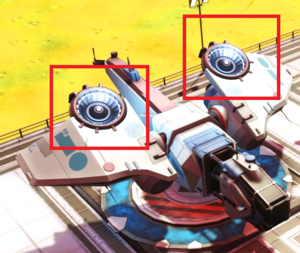 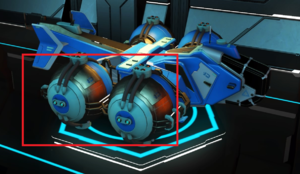 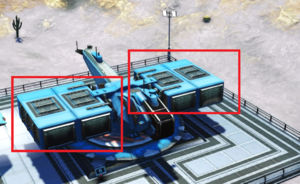 Ships of this type feature a shield absorb class bonus, and they also boast the highest possible inventory spaces. These ships are the largest out of all the other starships, and may or may not have wing features on them.

These ships are more commonly found in Gek systems.

Exotic is a special ship type. Ships of this type stand out for their unusual features, high class bonuses and high prices for a small sized ship. Exotic ships should always be S-class. 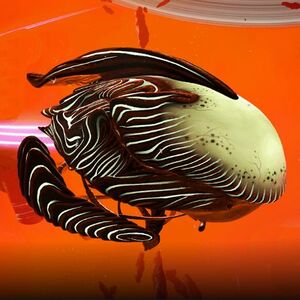 Ships of this type feature large amount of technology slots with emphasis on damage output and hyperdrive range. They are categorized by their "Organic" looking architecture, with many parts moving during flight. They were first added in the Experimental Branch on 18/02/2020, then were officially released on the Living Ships update. The Living Ships can be obtained through purchasing a Void Egg and following its questline or by buying it like any other. After the first, subsequent Living Ships cost 10,000 nanites to obtain, rather than building it from scratch.

These ships utilize Biotechnology to function, being completely incompatible with synthetic ship technology, both constructed and procedurally generated, and all technologies use different fuel than their synthetic counterparts. Being an organic being, no new technology can be "installed", but upgrades can be obtained via Space Encounters. As of 2.30, unlike other ships, it is impossible to expand Living Ships' inventory.

Freighters are considerably more expensive (and much larger) than any starship, with prices ranging as high as 178 million units. Unlike the above starships, Freighters cannot land on planets or be flown by the player. They contain a large amount of inventory space, and can be used as a mobile base, including farming and other base-related functions. Only one Freighter can be owned at a time; however, the player may trade in their current Freighter for one within a Space Fleet if they have enough units to make up the difference.

Once a ship has landed, players may trade with the owner, preview the ship's capabilities and if desired, offer to purchase it. Due to the ships being procedurally generated, players may never encounter the same type of ship with the exact same configuration twice, though fighters are more likely to appear as duplicates since there are fewer possible design configurations. Even starships that are similarly designed may not have the same amount of inventory space offered. By reloading a save, you can force new ships to appear, rather than waiting for the current ones to leave.

The prices of ships in No Man's Sky are listed in the Price Catalogue.

If you want to shop for a new Starship inside the HUB Region or other Civilizations etc. refer to the Starship Catalogue to find the ship that suits you the best.

Values in the table are in thousands of units. This table reflects the values of ships as of the Visions update, which included a significant reduction in the cost of freighters.

At first, it might seem that getting a bigger or better ship for free is always a good deal. However, a crashed ship needs extensive repairs to be fully functional and can drain a player's time and resources.

Several of the crashed ship's base technologies are damaged. Further the crashed ship always has damaged inventory slots that require more resources to repair before they can be used. The unit cost associated with items needed for inventory repair alone may be more than the net cost to purchase an equivalent vessel at a space station. There is also the cost to dismantle your old technologies and rebuild them in the new crashed ship or rebuild them from scratch to keep them for both. Finally, you will have to refill the empty hyperdrive, pulse engine, launch thruster, phase beam or other weapon, and deflector shield. Even after all this, though, repaired weapons have half the damage output of never-damaged weapons, so you will want to add a new weapon if you plan on using the ship in space combat.

On the other hand, if you find a damaged ship that is much larger than something you could otherwise currently afford at a star station, you can keep it and switch over now and repair the slots one by one as you gradually accumulate more units and resources. Paying a few extra units now to repair a crashed 48-slot S-class Hauler might save a lot of time waiting for one to show up at a star station, if that's what you ultimately want.

If you do decide to exchange your current ship for a crashed ship you can also just trade it in for a fully repaired ship. Even a beat up massive Hauler can be worth 10 million units and offer the chance to attain a decent Fighter. Of course you can dismantle as many upgrades in the ship as you want beforehand to gain resources.

NMS has significantly changed the way crashed ships are handled with each game revision, and much of the early advice pertaining to crashed ships is now obsolete.

Many starship components can be upgraded, including drives, weaponry, fuel capacity and defensive mechanisms. The upgrades available will vary based on the type of ship being modified. These can all be upgraded by collecting necessary resources and crafting the technology.

As of the Pathfinder update, new technology for starship upgrades can be purchased with Nanite Clusters from Gek traders located in space stations.
As of the NEXT update, these traders also sell Upgrade Modules for Nanite Clusters which contain procedurally generated starship technology upgrades. 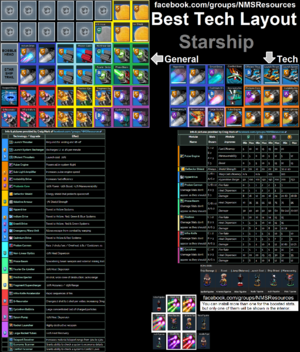 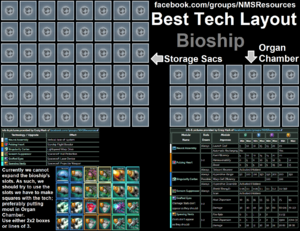 Players can upgrade their ship with additional inventory slots or class upgrade using the Starship Outfitting Terminal. Core stats will be upgraded following the archetype's rules and based on the unique seed for the ship, which means they'll always be the same for a given ship.

As of the NEXT update, ships are no longer damaged by the environment (planetary surface, rocks, plants, or asteroids in space). This combined with low flight allows for more risky and uncommon manouvers, such as flying a ship inside a large cave. Flying at props in high speed will destroy them.

If your starship is destroyed in space, don't worry! You will spawn in the nearest space station in your ship. You will lose all the resources stored in your ship's hold, unless you follow the "grave icon" (atlas shaped icon). Once you get there you will be able to collect your resources. It is possible that pirates loot your grave before you arrive, and you will lose all those resources. Your ship may have technologies damaged (except for pulse drive). Your pulse drive will also be refilled when you respawn.

If your starship is destroyed in space while in Survival Mode things are a little different. You lose your ship inventory permanently, and wake up a good distance away from your crashed ship on the surface of the nearest planet. Like Normal Mode, your ship will also have several damaged components.

Starship destruction in Permadeath mode results in the game ending, and your save being deleted.

While not in a battle, the shield recharges on its own. While in battle, some of the containers from destroyed ships will recharge the shield, or you can recharge it yourself with catalysts.

The looks of the ships, like everything else, are procedurally generated.

Before the Pathfinder update, the technologies and storage space were dependent on your current progress of the game and the kind of ship you currently owned.