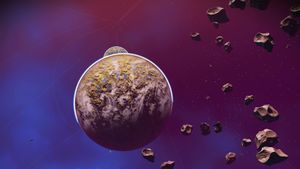 Local Serenity AH was discovered by Captain SpaceArtGek after he and his crew took the Island Links Base Portal to the Starfall system and successfully journeyed to Ocopadica. It is a place of lore among members of the Amino Hub.

It is home to 3 planets and 1 moon including Land o Lakes, Twin Vision, Frozen Dreams, and Geks Moon. When Local Serenity AH star was born, the dust clouds and accretion disk in the system eventually coalesced into the 4 bodies there now.

Originally it is hypothesized that a collision between Land o Lakes and Twin Vision caused the remaining scraps to form into Geks Moon and get caught in orbit around the giant glacial planet Frozen Dreams. The planet Frozen Dreams is also considered the source of all water in the system including all the shark lakes at Land o Lakes.

At the time of pathfinder players could obtain 100% zoology by simply landing at planet Land o Lakes and Frozen Dreams and uploading in options.

Initially SpaceArtGek set up a base briefly on Geks Moon, then moved to Land o Lakes AH where he created the Ocopadica Research Center and Aquarium, a base on a lush planet next to a lake filled with two pet sharks.

Eventually he moved back to Geks Moon at the Geks Moon Research Lab where he researched the region of Ocopadica, traveled between hubs and all over the galaxy using a 4 paths on the terminus teleporter. 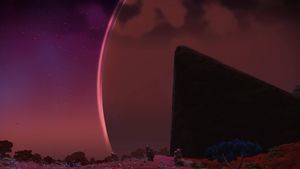