From No Man's Sky Wiki
Jump to: navigation, search
The subject of this article is from the Abyss update.
The information from this article is up-to-date as of 21 November, 2018.
This article was catalogued by the Galactic Hub. 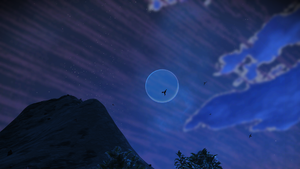 The night skies of Lodret IV are especially beautiful.

Lodret IV is a planet in the Ribets XVII system.

Lodret IV is a planet in the Ribets XVII system.

This planet is mostly notable for its black sand beaches and abundant aquatic crystals. Due to these characteristics, Lodret IV was selected as the Galactic Hub's second official colony, a tropical / aquatic themed colony. Players building on Lodret IV are encouraged (although not required) to build bases which are either underwater or have a tropical / otherwise "beach-like" theme.

Some terrestrial flora on Lodret IV have the strange property of scanning as identical species.