Lok are a genus in No Man's Sky. 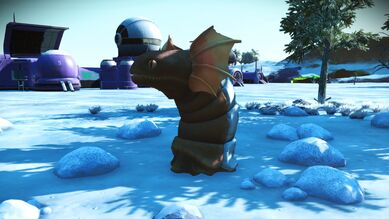 Lok is a genus of fauna in No Man's Sky, commonly referred to as "blobs".

They come in many shapes and forms. Some of these forms include: plant-like Lok (ferns and cacti), squid/octopus-like Lok, worm-like Lok, and rarely snake-like Lok. They are considered rare spawns, but can in some cases be the main species of entire ecosystems.

They produce Sticky 'Honey' when fed with their preferred bait.