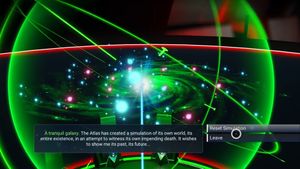 Holographic display of a Lush galaxy

Lush galaxy is a galaxy type.

Lush galaxy is a galaxy type and it is referred to in-game as Halcyon, Inspiring, Serene or Tranquil galaxy. These are considered as subtypes for Lush galaxy.

Players who choose to reset the simulation into a Lush galaxy during the New Beginnings primary mission, will start again in this galaxy type. This option is displayed with a green hologram.

Note: The galaxy subtype is indicated in ( ) after each galaxy. It can only be determined by finishing the New Beginnings mission in certain galaxies.