M-Field Engine 9/X57-B13 is an Experimental Multi-tool in the universe of No Man's Sky. This is a rare multi-tool because of it's purple crystals.

The S-class of this weapon has the following beginning stats: 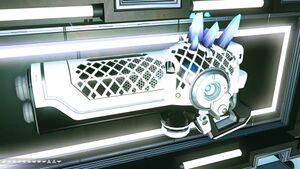 The S version of this multi-tool was found in the Akhtagi system, located in the Rykiroehed region of the Euclid Galaxy.

Reload the game on planet Artlaure Beta. The above portal coordinates take you there. After game reload travel to planet Molinderr Omega at the specified local coordinates. On PS4 there is a base built next to the Beyond Outpost which has the Multi-tool. On PC the outpost is marked with a few Communications Stations.

Images taken on PC during NEXT, has not been reconfirmed.