Melody of the egg 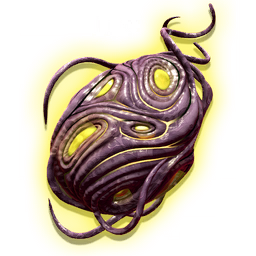 Melody of the Egg is a mission page.

The Melody of the Egg is a mission which is started by purchasing a Void Egg from the Quicksilver Synthesis Companion for a price of 3,200

Once a void egg is purchased, the player will begin to receive random messages on the communicator after warping. Each message will include a number, and the name for a glyph. Once all twelve have been received, the player can use that address to portal to a world where they receive further directions.

Note: This mission is not required for the Living Ship quest, Starbirth. It was only active between the time the Void Egg was available in the Quicksilver store, and when the Living Ship update was released.

The transmissions seem to arrive randomly after a warp, and take a few seconds to occur. The incoming transmission: "Please listen traveler."

A strange force is projecting itself into my starship systems. Its consciousness occupies my communicator, and it sings a short message...

and then one of these transmissions, in a random order:

Once the player reaches the planet, another message is received giving a clue to the destination:

This leads to an Abandoned Building near the North Pole, at planetary coordinates +88.88, +13.70

At the destination, a terminal will give lore:

You have found our echo...
You are wise, or you are lucky. Perhaps you are one, perhaps you are many.
Our echo grows in strength, as we ourselves grow.
We will be with you soon. We will travel together.
We are your friends in the dark. Watch for us in the stars!

Melody of the Egg was a teaser of the release of the Living Ship update. After the update it was replaced by the Starbirth mission.

There are some players who say they've done this from other galaxies besides Euclid, but it's probably safest to do it from Euclid.