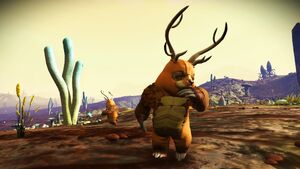 Mogara is a genus of fauna in No Man's Sky. They are commonly referred to as "grunts."

They are considered rare spawns, they were first demonstrated in the early gameplay demos, though they seem to have become more common as of the Atlas Rises update.