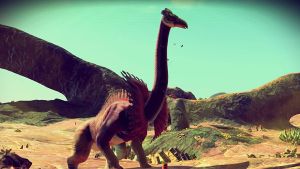 Symmetric gender, notable for its beak and large neck frill/"mane".

This Rangifae megafauna species is a heavy beast, shaking the surrounding ground with each step. It is also friendly, and the Exotic gender is good for riding on (just jetpack up to the front area of its back). Like many megafauna species, they can be spotted alone, but are usually found in groups of 2-4 individuals. They often lower their heads all the way to the ground to feed, suggesting they prefer to eat this planet's bushy or grass-like flora rather than the native tree species. 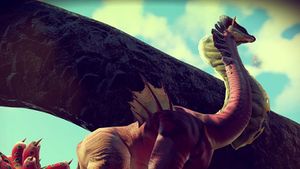 This incredible species of diplo is considered one of the main attractions for the Galactic Hub Project, and one of its eight main megafauna diplo species. 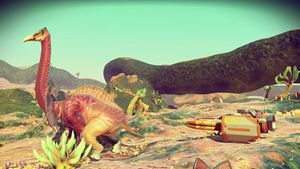 Comparing the Symmetric gender (the larger of the two) with the size of my ship.

Inhabits the radioactive planet Glory of Atom in the HUB-V(AS)-7A Nerevkarovgra system.