From No Man's Sky Wiki
Jump to: navigation, search
This page fills the role of Embassy for a Civilized space community. The information found here represents a user-created civilization that is a creative addition to the game.

The Moon Ring Society is a civilized space community.

The Moon Ring Society is a scientific and spiritual society found scattered across Civilized space.

It was founded in the Moon Ring's Nebula region of the Euclid galaxy and it's Capital System is the Fanqiu-Zohma system.

The Moon Ring Society, also known as the cult of the Moon Ring, is a spiritual and scientific community that emerged in the Euclid galaxy in Year 2020 of the Living Ship.

Moon Ring practitioners believe in a mysterious entity known as The Moon Ring who appears in the form of a giant ring to travelers alone and lost in the universe and offers them a path to ascension. Moon Ring spiritual texts states that The Moon Ring provides Ascension from this reality raising the traveler to a higher plane of existence. However, because no traveler taken by the moon has returned there is much debate as to what happens when one is taken by The Moon Ring. Some argue that the Moon Ring society is following a false god, while others believe that the Moon Ring is connected to the Atlas, or representing a reality beyond that of the atlas.

There are two factions within the Moon Ring community: the scientific Gala(Mystery) and the spiritual Hala(Truth).

In their search for further evidence of the Moon Ring, The Gala have generated good will in the region by rescuing crashed pilots and repairing their ships in exchange the Pilots story of why they crashed. This practice resulted in many new adherents to The Moon Ring Society and has so far uncovered evidence of the fourth recorded Ascension, Navio.

The first five entities known to have ascended were canonized as the Foundation saints. This period lasted from Year 1 - Year 13.

All saints following the first five are known as the Expansive Saints. This period of Ascension began in year 29.

Year 3 - Foundation of The Gala, first of the Moon Ring Society

In Year 3 of the Living Ship, an exploratory team of Korvax Analyst Entities were searching through the debris of a crashed ship and discovered the first evidence of a Korvax named Ka being taken by The Moon Ring.

Year 4 - A second Ascension and the Book of Hala

Year 5 - Construction of the First Temple 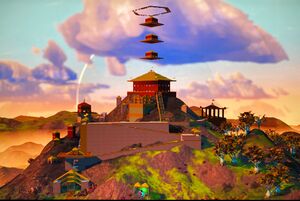 Year of 6 - Creation of the Moon Ring Society 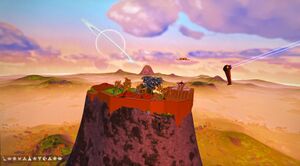 Year 9 - A third ascension was discovered on the planet Pillars of the Gods, in the system Tri Alignment.

Year 10 - Construction of the third temple, The bronzed Pillar was finished at the site of the third ascension on the Pillars of the Gods.

Year 11 - A fourth Ascension was documented, of a Hala pilgrim, Korvax entity Navio.

Year 13 - The fifth ascension occurred in a system nearby Moonhala Temple Complex.

Year 31 - The Expansive Saints and the sixth ascension confirmed

Followers of the Moon Ring should name systems: Moon Ring's _____. They are encouraged to find inspiration in the systems and use that for the third word.

Planets and moons can be named anything. However, popular names often include the word Hala or Gala based upon their Faction allegiance as well as one of the first five ascension's names. Ka, Fash, Masa, Navio and Shalatar.

Some Planet and Moon examples:

If you want to join the Moon Ring Society, travel to Moonhala Temple using the coordinates and leave a message at the top of Mt. Gala. You can also add yourself to the Members list.

The Moonring Society has established diplomatic relations with:

The current rule is to familiarize yourself with the History and knowledge of the Moon Ring Society.