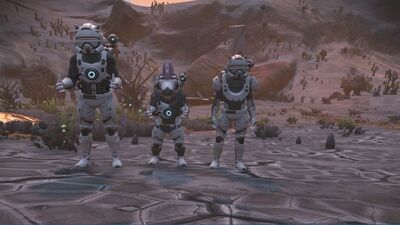 Multiplayer allows multiple players to play No Man's Sky together. 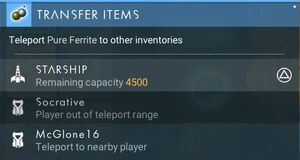 Multiplayer is a feature of No Man's Sky that saw a more traditional implementation with the NEXT release and was further expanded upon in the Beyond update.

The game can currently be played by multiple people together online in parties of 2 to 4 players. Up to 32 players on PC or 8 on console can be in the same instance of a star system. When encountering other players on console you can only use VOIP (Voice over IP) and emotes to communicate, while on PC you may also use text chat to communicate with each other. You will also be able to see each other's character model, multi-tool(s), starship(s) and base(s).

While No Man's Sky was not a traditional multiplayer game at the beginning, the feature was gradually elaborated upon through various releases. There is however, still no split screen co-operative or local multiplayer mode. You can only play multiplayer over the internet.

Once a base is built, an exocraft racetrack can be created on the home planet's surface. You may then race on your own circuit to create a best time for other players to compete against.

A Communications Station can be used to leave a short message for other players.

"Hm. It's really you, isn't it? I had to see it for myself. The dawn of the Travellers. The last days of the universe. But don't give up hope. It's said that one of us visited you in your darkest hour and showed you a vision of a future you believed to be impossible. So, here I am..."

I see a vision of myself, older, undaunted, travelling beneath the star of an alien world. But I am not alone. There are other Travellers with me. More than just apparitions, more than just visitors. One day we will travel together, side by side. There will be no sky we cannot claim, no challenge which we cannot overcome. Our universe awaits.

The walls between worlds fall, each simulation collapsing into the other. (...) The Travellers are no longer separated, no longer kept apart. They stand side by side at the end of days, traversing the remnants of creation, laughing, dying.

The walls of the multiverse collapse, and the Traveller can see Traveller, friend can see foe.