Myramenis is a planet in No Man's Sky.

Myramenis is a planet in the Jabberwocky Albus star system on the PS4 version of No Man's Sky universe.

By far the most hospitable planet in the Albus system, Myramenis can still be a dangerous place. The night time temperatures can drop to -60 F and packs of "Hell Hounds" roam the surface, although their preferred prey are the local fauna, rather than an unwary traveler. 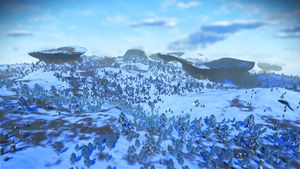 These saddle geologic structures can also be found on Bolarkin Mator

None known at this time 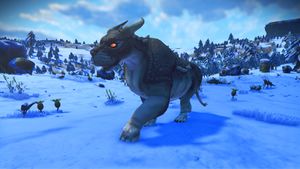 The "Hell Hound" of Myranmenis can be a ferocious hunter