On March 29, 2018, Hello Games announced the planned summer 2018 release of the NEXT update. Hello Games wrote this on their website:

Our small team is working our socks off on the future of No Man’s Sky, but we wanted to share some news from behind the scenes.

Our upcoming update will be called No Man’s Sky NEXT, coming Summer 2018.

Really thanks to the amazing community, each update for No Man’s Sky has been more successful than the last. Atlas Rises, our most recent update, was especially so. That represented a real inflection point in the legacy of our game. This team has never stopped running at sprint pace over the last few years, so perhaps it would have been tempting to stop there. Surprisingly though it had the opposite effect on us, and it emboldened us all to go further and faster.

We called our upcoming update “NEXT”, because it’s an important next step on a longer journey for us and the community. It will be our biggest update so far, and something we’ve been working ridiculously hard on. This will be free to existing players, and we’ll continue to support No Man’s Sky in this way for the foreseeable future.

No Man’s Sky is also coming to Xbox One, which has long been hotly requested by patient Xbox fans. The Xbox version will come with Foundation, Pathfinder, Atlas Rises and NEXT from day-one, in 4K and HDR for Xbox One X. We are also bringing No Man’s Sky to WeGame, the Tencent Chinese platform. Since Atlas Rises, China is now our second biggest region for players, and we are delighted to be able to support our Chinese players further.

We know that there is a lot of hunger out there for news and updates on No Man’s Sky. We appreciate your patience, and we promise we are working hard to reward it.

On 17 May 2018, Sean Murray announced on Xbox Wire that the planned release of the NEXT update will take place on 24 July, 2018. Sean wrote the following: 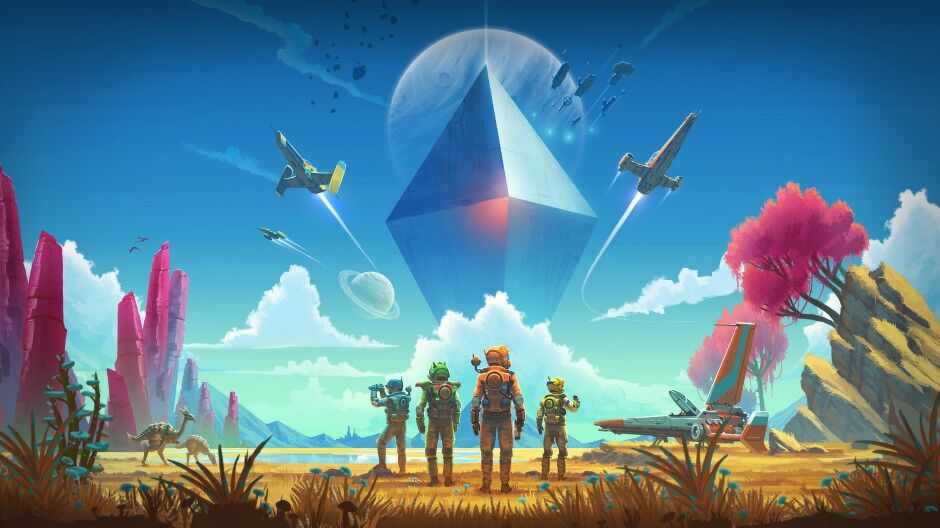 We are busily working on Next for No Man’s Sky, but wanted to share a little news from behind-the-scenes. Today, we’re letting people know that you’ll be able to play No Man’s Sky as a full multiplayer experience with your friends in Next. We wanted to share our new cover art too (see above) and announce the release date: No Man’s Sky will launch on Xbox One July 24.

We were delighted by the reaction to Next, even though we just shared the name so far, it means so much to see that people were already pumped about it. The reaction that No Man’s Sky is coming to Xbox One was lovely too. I’m excited for new players to be able to play such an expanded game from the start.

We’ve been playtesting multiplayer for the last six months, and the game has evolved into a very new experience that we think the community will enjoy.

For example, you’ll be able to explore the universe with your friends, or bump into random travelers. You can help friends to stay alive, or prey on others to survive. Tiny shelters or complex colonies that you build as a team are shared for all players. Fight as a pirate or a wingman in epic space battles with friends and enemies. Race exocraft across weird alien terrains, creating racetracks and trails to share online.

That’s always been the potential I think everyone could see in what we were making, it’s been a lot of hard work, but thanks to team and the community we are so glad to finally able to make it a reality.

Something I’ve learned is that I much prefer making games to talking about them. I avoid it as much as I can now, but I just did my first interview in a couple of years with Inside Xbox to talk a little bit about No Man’s Sky coming to Xbox One.

This is an incredibly important update for us, but it’s also just another step in a longer journey, and we’ll continue to support No Man’s Sky in this way for the foreseeable future.

This will be our biggest update yet and we’re pumped to be bringing Xbox players along on the journey with us now too. The launch of No Man’s Sky on Xbox One will include all three major updates — Foundation, Pathfinder, and Atlas Rises — along with Next and dozens of smaller patches.

No Man’s Sky has a lot we’re going to surprise people with the Next update and I can’t wait until we can share more as we lead up to launch on July 24.