NMSA-Cpt-Steve is a star system in No Man's Sky.

NMSA-Cpt-Steve is a star system in the No Man's Sky universe.

It is notable as it featured as the host system for the 06-08 Mar 2020 weekend mission. Many bases have been constructed in the system.

It is also noteworthy as it is designated as a Phantom star as it is not normally accessible in gameplay. 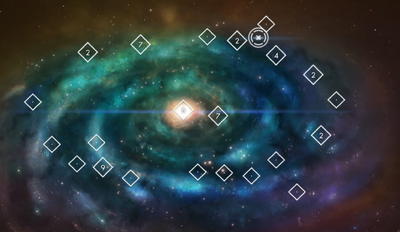 This is the location of one of Weekend Missions started on 06 Mar. 2020. This system has a number of player bases.

This system is named in honor of the YouTube contributor in the NMS community known as Captain Steve.

It was revisited on 7-June-2020 by CELAB Galactic Industries for a followup survey due to strange behavior in identifying the region name and system structure on the galactic navigation map. The Info page still shows 6 planets and the system name as per NMSA-Cpt-Steve, but the galactic navigation screen shows a different name label of Iltones-Nag XII 0B9C:00F2:01B0:00DE. Placement of signal boosters on planets in the system still show correct coordinates. This behavior when a galactic navigation map appears to show a different system in the same region appears to be a unique software glitch.