From No Man's Sky Wiki
(Redirected from Nada)
Jump to: navigation, search
The subject of this article is from the NEXT update.
The information from this article is up-to-date as of 28 October, 2018.

Nada is an NPC character in No Man's Sky.

Priest Entity Nada currently resides in the Space Anomaly along with Polo and belongs to the Korvax.

They are a non-compliant Korvax and do not engage in the Korvax Convergence. The Convergence constantly tries to "wipe Nada from existence" by regaining control over their shell. They become more paranoid and pessimistic as the player progresses in the game. Eventually Nada will ask you to continue to the centre of the galaxy, says that their work will be done, and that they will then return to the Convergence.

They are referred to as "they" as a matter of course, being that they are a Korvax, which are constructs without gender. 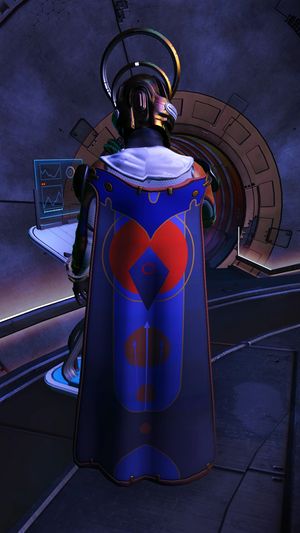 Nada presumably first met Polo on a freighter. In a dimension where the sentinels had destroyed all life, Nada saved Polo from being killed. They then went on to the centre of the galaxy in the freighter. Before they could travel to a new galaxy via the centre, the sentinels killed Polo, and Polo tells Nada that they will meet again in another universe.

Nada will offer three different kinds of rewards to players once per visit to the Space Anomaly.

Nada is wearing a red and blue cape with a formation of three starships and an Atlas symbol on it.