From No Man's Sky Wiki
(Redirected from Nanites)
Jump to: navigation, search
The subject of this article is from the Living Ship update.
The information from this article is is up-to-date as of 6 April, 2020.

Nanite Cluster is a resource and an alternative form of currency.

Nanite Cluster (∞) is a resource and one of the special elements. It is also a secondary currency (

A dense miasma of Nanites, undulating in its potentiality. These clusters are stable, but unrestricted nanite foam can produce undesirable runaway reactions in the presence of organic matter.

Used in the construction of advanced technologies. Highly valuable to specialist traders. 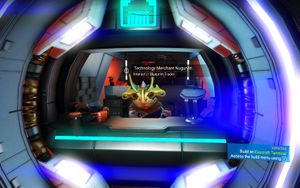 Blueprint Trader at a Gek Station

Nanite Cluster can be acquired by:

Nanite Cluster can be refined using a Refiner with the following ingredients:

In the storyline quest Patterns in Time, the Explorers Guild's representative, a Korvax, uses Nanite Cluster manipulation to reveal to the player glimpses of their race's past. They suggest that these clusters come from Sentinel casings.

Later in the same quest, the Merchants Guild's representative, a Gek, uses their pheromones to reveal to the player the truth behind the fall of the First Spawn. The enslaved Korvax entities sacrificed themselves in the spawning pools of Balaron and used the Nanite Clusters from their bodies to rewrite the biology of the Gek. This led to the downfall of the First Spawn Empire.

A decent way of converting units to Nanite Clusters is to purchase Starships at Space stations and scrapping them. It is recommended to be in a high-wealth system for better class ships and to have at least 200m units before starting. This will allow you to go for hours without restocking units, however this can be done efficiently with as little as 75m units,

Start by buying any ship in the Space Station, smaller ships and ships with few inventory slots, like shuttles, can be magnitudes cheaper than larger ships like haulers, Currently, there seems to be no benefit in choosing the larger ships other than convenience. Next, go to the large orange interface displaying the ship you just bought near the character customizer.

Confirm that you would like to scrap the ship along with its contents. This operation yields a minimum of one (1) and a maximum (unconfirmed) of four (4) upgrade modules, with the module grade matching the grade of the salvaged ship. These modules will have random sell values from 30-600 Nanites each, depending on class. . They function identically to the ones bought at the Technology Merchants so it's recommended to trade them instead of installing,

In addition about 75% of of your units are recovered in sellable items, However it is not recommended to dump your scrapped material in the same system economy twice, as prices for your bulk items will be reduced by as much as -80%

This method can get you upwards of 30,000 Nanites/hr, making it a strong contender for the best method in the game for acquiring Nanites

Salvaged Data is in Buried Technology, found on most planets and most often near Broken Machinery.. 1-4 Salvage data is received from each Buried Technology. A Salvage Data can be refined into 15 Nanite Clusters each as well as used to unlock certain technology, making this an extremely fast and safe way to progress through the early game while gathering a reasonable amount of nanites,

This method is capable of at least 1000 Nanite Clusters an hour without proper jetpack upgrades.

Discovering all creatures on a planet or moon[edit | edit source]

While discovering all creatures on an astral body can yield up to 500 nanite clusters, it can take many hours, especially when creatures are underground or underwater.