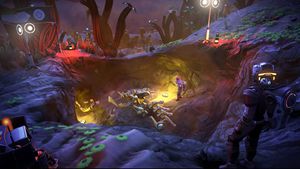 Natural Burial Site can be found less than 100u under the planet surface.

icon. The Terrain Manipulator is needed to dig the Ancient Bones out of the ground.

After the Ancient Bones are uncovered, they can be opened and the player will be rewarded with a random Excavated Bones.