From No Man's Sky Wiki
Jump to: navigation, search
The subject of this article is from the NEXT update.
The information from this article is up-to-date as of 28 October, 2018.
This article was catalogued by the Galactic Hub.

Neptune's Proving Ground Arena is a player base. 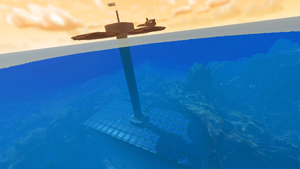 The full structure of the arena.

Neptune's Proving Ground Arena is a player base designed for player-versus-player (PVP) combat, located on the planet Radorego VI in the HUB1-E Coryzagenia system.

The arena is named after the Roman sea god Neptune. The arena's design allows players to transition between swimming and standing during combat.

When using this arena, it is recommended that you either require all competitors to remove any Oxygen & Oxygen Capsules or provide an equal quantity to all competitors, to guarantee equal underwater breathing ability.