New Eden is a oceanic planet in the Rohmadgh Nebula.

New Eden is a planet in the star system Liberty on the PC version of No Man's Sky universe. It is the only planet in Liberty System, and has no known moons. The planet has a human population in the range of hundreds of thousands, but official census records are classified by the United States Bureau of Planetary Records.

It is currently the capital world of the United States of New Cascadia. The planet is 128LY from the former location of the Euclid Wormhole.

New Eden was first discovered by a NASA probe around 2090, and it was earmarked for future colonization for it's habitability. The United States Navy established a secret research and fueling outpost named Outpost 33 on New Eden around 2102 to facilitate the expansion of military operations to the lower edge of the Rohmadgh Nebula. After establishing their presence, all records of the planet were purged from public databases.

During the First Contact War with the Sentinels, the base was slowly moved underground to avoid detection. After the Korvax Convergency joined the war against the United States, Outpost 33 became a secret observation post. Throughout the war, the personnel on New Eden provided pivotal intelligence to the U.S Space Fleet, enabling them to successfully ambush Korvax fleets on a number of occasions. A number of attempts were also made to learn more about the Korvax, all of which ended in failure due to the hive-like structure of their civilization.

After the Glassing of New Cascadia, the dreadnought USS Congress brought the last surviving American colonists to New Eden. These colonists were settled onto the planetary surface after the completion of Operation Umbrella, a array of satellites that disrupted the connection the local Korvax had to their hivemind and instead reprogrammed them to report on the frequencies monitored by the Republic Starfleet. This was done with the intention of hiding the planet from the Sentinels and the military forces of the Korvax Convergence. 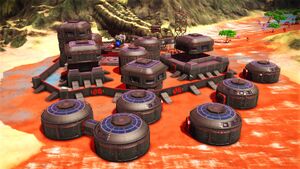 Adrestia City, also known by the official designation Outpost 33, is the administrative and military center of the republic

Adrestia City, built on the foundations of Outpost 33, is the capital settlement of the United States of New Cascadia. The city still makes great use of its underground facilities, and most of the buildings above ground are used for military or administration purposes.