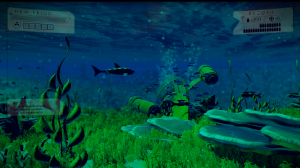 New Eridu Ocean is a large body of water found on the planet New Eridu.

New Eridu Ocean is filled with aquatic wildlife, such as passive fish and aggressive shark-like creatures, as well as a diverse amount of corals and green seaweed. Sean Murray has stated that the sharks in New Eridu Ocean will actually attack if provoked.

As shown in the original VGX Trailer: