From No Man's Sky Wiki
(Redirected from New Lennon)
Jump to: navigation, search
The subject of this article is from the NEXT update.
The information from this article is up-to-date as of 28 October, 2018.
This article was catalogued by the Galactic Hub.

New Lennon is a planet in No Man's Sky. 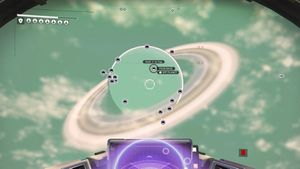 Early example of the multiple settlements on this planet. Base visibility comes and goes with server stability. 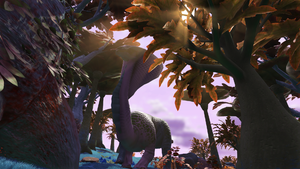 New Lennon is a planet in the star system HUB10-6A Quetzalcoatl's Sun in the No Man's Sky universe.

Technically the third capital of the Galactic Hub, it is regarded as more of a second capital. The true second capital, Elysium (Tartarus Relay), never attained the popularity or recognition of Drogradur NO425 (first capital) or New Lennon. The name "New Lennon" is a reference to HUB-G-211 Lennon, the original capital system of the Galactic Hub, which was named in honor of John Lennon.

Note: This list does not include purchased resources, such as those at trade posts, Galactic Trade Terminals, or space stations. See the main system page for purchasable resources.

The fauna of New Lennon are one of the planet's main attractions. The planet's main draw is a megafauna Rangifae species, the 6.0m R. Musiretioe (Jade Hood Diplo). Additional commonly-spotted terrestrial species include the hexapodal (six-legged) megafauna dog T. Soilfufunium, the small exotic cow species T. Corpsirisia, and the hovering crab species G. Diploaioe. Two species of Cycromys birds are native to this planet, the large Z. Monkogium and smaller O. Feliakrii. Aquatic species are frequently spotted during the daytime, particularly long-tailed W. Hotbotinum fish and jellyfish-like U. Trapmansus. Other fauna, such as the terrestrial predator species Q. Leechrarhea, are very rarely spotted. Subterranean species are also rarely spotted, largely because most caves on New Lennon are either very small or mostly filled with water.

Note that, at least on PS4, most fauna species on New Lennon have been uploaded by multiple users. This list references only the first upload of a given species, as that was the "original discovery."

The terrain of New Lennon is diverse, presenting a variety of opportunities for exploration, relaxation, photography, and construction / settlement. 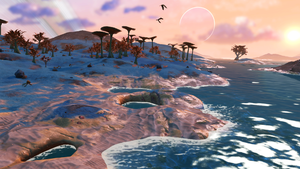 A narrow beach with tide pools.

The standard terrain - that is, terrain which is not underwater or underground - of New Lennon is composed of islands of various sizes. Some are too small to land a starship on, while others could host several massive bases and still have space left over. They also vary in that some have fairly large mountain peaks, while others are more flat, while others still (mostly small islands) may be perfectly flat.

Islands are rarely solitary, usually forming archipelagos, or chains of islands. The closest thing to "continents" on New Lennon are areas where the terrain occupies more space than the water and the islands are spaced closely enough that water bodies are closer to rivers than seas. There are no large, truly-unbroken landmasses.

Most islands are covered in fauna and at least some flora, but others, particularly small-to-medium-sized islands which do not rise high above sea level, may be devoid of both. Sandbars are also common. On larger islands, beaches can be found where the water meets the land. Most beaches are a mixture of sandy and rocky terrain.

Caves on New Lennon are usually approximately large enough to drive a Roamer or Colossus exocraft through, if they can fit through the often-narrow cave entrances. Cave systems may run for considerable lengths and branch off in many directions, but entrances to caves are uncommon. Caves are mostly composed of long tunnels which occasionally connect to other tunnels in more open chambers. Caves frequently taper off into flooded portions which may have few, if any, air pockets. Cave divers are recommended to equip sufficient Underwater Oxygen Upgrades and bring well-charged Terrain Manipulators.

As is true of most caves, bioluminescent Marrow Bulb flowers and Cobalt stalagmites are the primary features aside from occasional subterranean fauna. As cave entrances are uncommon, interlopers seeking caves to explore may have the most luck locating caves by searching for "Subterranean Relic" (Vortex Cube) or "Hazardous Flora" markers with their Analysis Visor. Note that Hazardous Flora markers will also appear above ground on M. Quillmipium (Lianara Vines).

Planet-shaking steps from Jade Hood Diplos can often be felt even underground.

Oceans on this planet are somewhat shallow compared to the deepest possible oceans. Landmasses may enclose bodies of water in various ways, forming lakes, lagoons, (non-flowing) rivers, bays, and gulfs. Large, mostly-island-free oceans are also found on this planet.

Aside from observing aquatic flora & fauna and photographing underwater landscapes, aquatic cave diving is one popular activity in New Lennon's waters. It is also likely the most dangerous single-player activity on the planet. As mentioned above, underwater caves may go long periods without air pockets. To avoid drowning, cave divers are strongly advised to equip sufficient Underwater Oxygen Upgrade modules and bring fully-charged Terrain Manipulators. To access depths even greater than what Oxygen modules will allow, Roamer (or Colossus) Exocrafts can provide a mobile air pocket. 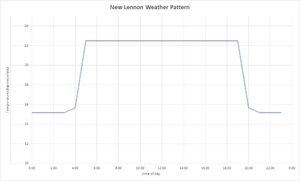 The weather pattern of New Lennon. No storms occur on this planet.