New Ragon is a planet in No Man's Sky.

New Ragon is a planet in the star system HUB10-44 Masaoka-Olney in the No Man's Sky universe. 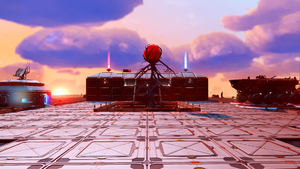 A sproutling O. Softdatosa serves as the centerpiece of this base.

Predator infestation. Watch out for the 4m dog creature.