New Risa is a planet. 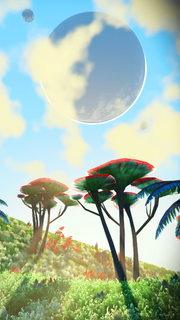 The rare Oglomium Kiatarsus flora species is one of this planet's main attractions.

New Risa is a planet in the HUB7-G-129 Jewel of Kogii'ithip system.

New Risa is a "blob planet," meaning it is inhabited strictly by Lok fauna, except in caves and in the skies where other genera can be found.

Except for the native cave-crab species, there are no predatory species on New Risa.

The 24-hour temperature trend for a day on New Risa (ignoring storm temperatures).

New Risa has a somewhat cold climate, consistently remaining below 0.0 °C, as is the case with many lush planets.