From No Man's Sky Wiki
Jump to: navigation, search
The subject of this article is from the Visions update.
The information from this article is up-to-date as of 13 August, 2019.
This page fills the role of Embassy for a Civilized Space community. The information found here represents a user-created civilization that is a creative addition to the game.

The Nibiran Freelanders is a civilized space community that was created during the early Atlas Rises version of No Man's Sky and continued in NEXT, Abyss and Visions. The purpose of the NF is to provide services to other groups and civilizations for hire as a nation of bounty hunters and independant people, and does so most frequently with the Aviszar Cartel and the Void Collective, which the NF directly and peacefully boarders in space. The NF was inspired by the Nibiru Planet X Conspiracy which is where it gets its name. Always recruiting.

Halloween 2017 The Nibiran Federation (NF) is founded a few months prior in August-ish, but Halloween is considered the official founding date.

November 2nd 2017 The NF allies itself with the United Federation of Travelers after a short controversy.

December 31st 2017 The Oligarchy separates from the Federation, announces it's name change and the ICC

January 13th 2018 The Oligarchy evacuated Euclid with the Solarion Imperium 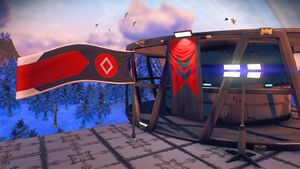 here's a picture of the flag

Here is the emblem for the Nibiran Federation that was used until its rebirth one day after Unification Day 2017 into the Nibiran Oligarchy and the Oligarchy's Atlas Rises era emblem. This is not an important part of this page, just a treat I guess. Here are also three news things Dante made back in Pathfinder on MS paint. Galactic Empire of HOVA's Harsh Buds war propaganda was an inspiration.