The Nomad Mercenaries were a civilized space community.

The Nomads were a Civilized space group.

They began in the Eissentam galaxy, but were in the process of spreading to others.

They had no permanent presence on any worlds.

Our mission was simple: hunt the enemy.

Be they Sentinels, pirates, or monsters, we sought them out, and destroyed them.

After the Great Shift, the universe became a much more dangerous place to live. Over the years, pirates have gained a larger foothold in the galaxies, the Sentinel presence has grown exponentially, and the primordial Horrors have been awakened from their long slumber. It was time to fight back, and show the evils out there that this universe is under Traveller protection. However, over the many months of attempting to recruit others to join this cause, I realized that I was the only one around that cared, and the ones who did were already a part of better known mercenary groups. As such, it is with a heavy heart that I close recruitment of the Nomads. While I will no longer attempt recruitment, I will still uphold the mission on my own, without hiding behind a banner or group. I leave you with this:

For I am the Nomad.

I roam the infinite, protecting the innocent, and destroying the guilty.

I will make this universe safe for all within it's confines.

I Am A Guardian.

Farewell, friends. Stay safe out there, and hey: if you think you can breath life back into this husk of a group, more power to ya.

We only have one rule.: 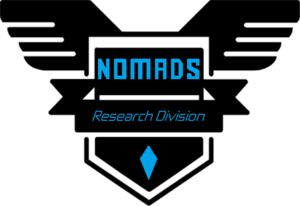 This badge signifies a member of the Nomad Research Division.

The Nomad Research Division or The Nerds, was formerly the United Colonies of New Sol. They seemed to have fallen on hard times when we showed up, We have absorbed what was left of their organization, and have put them to work, setting up temporary research camps on anomalous worlds and using their expertise to better understand how to destroy these oddities. They are also responsible for the recording of our journeys, and what systems and planets we've come into contact with. Consult this page to join the research division of our group, and learn a bit more about our newfound assistants. NOTICE: RECRUITMENT IS CLOSED.