Odion Zeye is a planet. 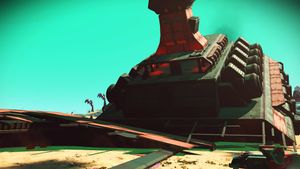 Wreckage from "The Battle of Zeye"

High Energy Planet. This planet has a very long history with the Vy'keen. Houses, orders and factions orchestrate all the time in the Vy'keen free ranks that aren't bound to the main base of their empire. As a result, you tend to see a lot of feuding with this proud warrior race.

45 years ago, a great battle broke out with two feuding ranks that were vying for control over Odion Zeye. Thousands of warriors were killed in the bloody battle that waged both on the ground and in the skies of Odion Zeye. Ultimately, both factions destroyed each other until there was hardly anything left to salvage. Graveyards of ships and vessels can still be found today from this pride-filled war (see photo). However, today, the main operations of the Vy'keen empire control this planet and this system. The radiation is at times difficult to manage around, but that comes at the expense of their people's past war polluting the planet.