This frozen forest planet is mostly worth visiting to gather the valuable resources here, which include Coryzagen and Murrine. The fauna here are hard to locate and very spread out, so many remain undiscovered. Those that have been discovered are pretty "common" in terms of their appearance. 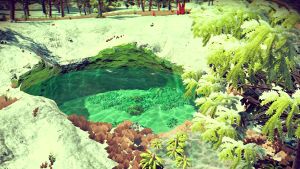 A sandy, Viridium-lined pool. Viridium is common here, although not all deposits are filled with water.

The scarce fauna on this planet are unremarkable, mostly consisting of Ungulatis and Procavya species. Four species remain undiscovered (PS4), these are most likely 1 land predator and 3 aquatic or subterranean species.