From No Man's Sky Wiki
Jump to: navigation, search
The subject of this article is from the Visions update.
The information from this article is up-to-date as of 13 August, 2019.
This article was catalogued by the Galactic Hub.

Olverha is a planet in No Man's Sky. 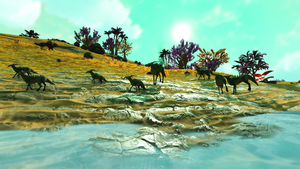 A small herd, or large family, of T. Soilpitamum (Decibel Deer) near the shoreline.

Olverha is a planet in the HUB4-130 Paradise Beaks system. This tropical planet has many notable features, including: a species of megafauna (~6m) Mogara / Grunts, a species of rare violet flower-trees rarely seen elsewhere in-game, beautiful beaches and underwater caves, yellow bubble / lollipop grass, a Cycromys / bird species, and more.

It's also the location of the Galactic Hub's fourth colony, the coastal colony of Dorinish. See Notable Locations & Waypoints for more info. 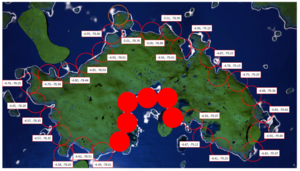 Dorinish is the Galactic Hub's fourth official colony - an organized settlement of multiple player bases. Inspired by Southern California, Dorinish residents live along the coastlines and are encouraged to build small-to-medium-sized homes which occupy both the land and sea.

Base sites are spaced approximately 400u apart (each base claim has a 200u radius). Base sites can be claimed on the Residency Spreadsheet. Be sure to do this before placing a base computer

That's it! 30 spots per platform are available on a first-come first-serve basis and if no base is built after some number of weeks, the base claim may be forfeited, following notification by Galactic Hub Staff.