Onmahir Arnaqu is a planet in the star system Mutandu XV on the PS4 version of No Man's Sky universe.

Onmahir Arnaqu is a very unusual planet. The game has it labeled as a “planetary anomaly” for good reason. The planet is a red rock with a coating of black dust covering its surface. It is neither very mountainous nor very cavernous. The temperature ranges from a daytime high of 86.5° F to a nighttime low of -12.4° F, neither of which is severe enough to trigger exosuit protections. If the planet has storms, then their conditions are unknown at this time; at least seven consecutive sols were spent on the surface and there were no storms in that time.

What makes the planet unusual is its rock formations. In lieu of organic forests, Onmahir Arnaqu is covered with levitating, metallic pillars known as Alfrieite and Slovoite. They are tall, with the former being approximately 10 meters high, and when flying low they work as slaloms. There are metallic, black shards that lay across the ground and some that levitate in formation. All of these objects give the impression of obsidian, but as you near them you see curious patterns on them that signal they have been distressed. Taken collectively, all of these items give the planet a bleak and otherworldly feel.

Resource availability is also unusual. Onmahir Arnaqu is abundant with iron and plutonium but void of platinum and zinc. It has a very low supply of carbon as well. Notably, this planet lacks the whip-like plants that attack Travelers on so many other planets. 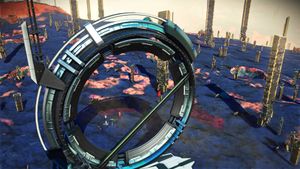 Most planets have a variety of waypoints on them, but not Onmahir Arnaqu. Waypoints here are composed of a save point, a lamp, a boundary failure and maybe some cargo containers to search. The boundary failures do not offer lore as they are described. Instead they are simply one more thing to make this planet unusual. The planet has at least one habitable base, but everything else that a signal booster points towards is off-planet. At least a dozen waypoints have been discovered and there is no variation other than some have cargo containers and others have not.

The portal has not been located yet.

No Traveller graves have been located yet.

The sentinels pay little attention on this planet.