Outer Rim Gamma is a star system in No Man's Sky. 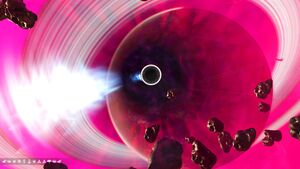 Outer Rim Gamma is a star system in the No Man's Sky universe.

Positioned 1.158.806 light-years from Rewmanawa core, this system is in the border of the galaxy, in the Gamma Quadrant. Further from it there is only the Fade, a place where stars are not reacheable by explorers.

This system has been chosen as the base of operation for InExCor Rewmanawa Outer Rim Expedition, and has been reached after a long and difficult navigation through Fade Pockets, following Black Hole Markers and facing a low density path. InExCor explorer Ygolnac used his flagship Erebus, equipped with a 3005 ly warpdrive, for the voyage.

The 39-InExCor Outer Rim Outpost has been established on the planet Lawell.

The system has a Black Hole. 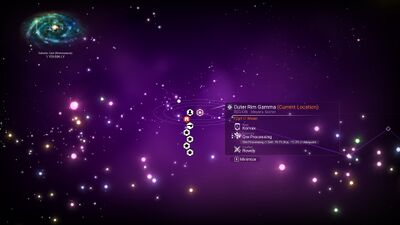