There are multiple game-release versions of the Oxalis embassy page. 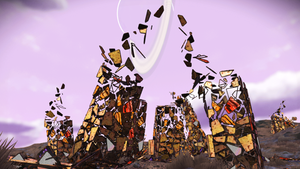 Oxalis is a civilized space zone.

Oxalis Visions is a civilized space zone located near the centre of the galaxy Euclid. During the Visions era, Crash City was built and the Oxalis Hotel Chain was expanded.

Crash City is a player base in the 131st galaxy and is located on an archipelago in the Tidea Sea. The city was up to the Beyond era divided into safe walk-in buildings and crash zones.

Oxalis Visions is a solo civilization and member of the United Federation of Travelers.
Headquarters: Crash City

The Oxalis area includes 10 stars, 30 planets and 8 moons. The Nesdori Spur region in Euclid has been explored and documented since the Pathfinder update.