The Pandarian Empire is a civilized space community.

The Pandarian Empire was founded and created by A_SavagePanda as a Galactic Hub civilisation.

The capital system of the Pandarian Empire is New Pandaria, located in the Renbellanj Expanse and it's home base coordinates are located here:

The motto of the Pandarian empire is "Strength in knowledge". 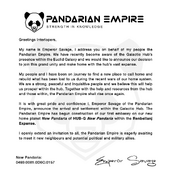 The Pandarian Empire have only made one public announcement as of yet. This announcement consisted of the declaration of the arrival and settlement of the Empire within the Galactic Hub. Emperor Savage also extended an open invitation to all interlopers and civilisations alike, freely explore and interact with the citizens of the Pandarian Empire and visit the first embassy. (Although construction is still in progress)

The Pandaria Empire have settled and begun construction of only one main base at the moment.