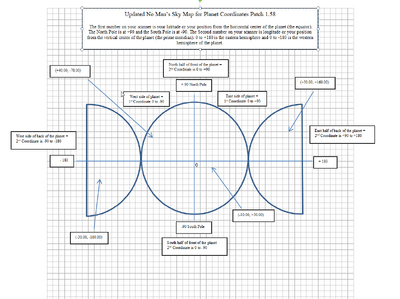 This article is about geomagnetic planetary coordinates shown in the Analysis Visor. For information on other types of coordinates, see:

Planetary coordinates are x/y geomagnetic coordinates shown in the Analysis Visor that help the player to navigate the surface of a planet in the cardinal directions. Their mechanic is identical for both planets and moons in No Man's Sky.

Some creature description will point players toward a specific hemisphere.

Remember to additionally use a Signal Booster and write down the Galactic Coordinates of the planet, to find the planet again.

Check whether you wrote down the minus and plus signs, they are important.

How to find a location again using coordinates[edit | edit source]

While walking, compare your current and target coordinates, and walk so the numbers grow closer.

When documenting this information on a wiki page, use the latlong macro.