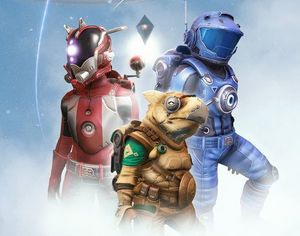 Player roles are defined by the players themselves.

The role of the player in No Man's Sky is one of choice, with different play styles and approaches including, but not limited to, the four pillars of the game: Explore, Fight, Trade, and Survive.

Because the universe of No Man's Sky is procedurally generated and hinges on discovery by the player base, exploration is a viable focus of No Man's Sky. As players explore and discover new planets, systems, animals, and minerals, they are paid for these discoveries, in Nanite Clusters and units, meaning that any player can dedicate their game to exploration and still progress. Players may also discover procedural Artifacts in buried Ancient Ruins, which may also be sold for a profit.

Players also receive naming rights to their discoveries, which are recorded by The Atlas.

Instead of being a general explorer, some players may choose to become specialists in a certain area of exploration, either studying specific cultures, or using game devices to look for specific items in designated areas.

Combat is a viable method of gameplay. Firing on trade ships, fighting pirates, and laying waste from orbit are all a major part of No Man's Sky.

When players die, their cargo is dropped into space or on a planet (depending on their location at the time of death).

The sale of basic materials, or the creation and sale of new items, is a viable gameplay approach. Player gathered resources and player manufactured items can be sold at a Galactic Trade Terminal to earn a profit.

The value of basic materials and manufactured items varies based on rarity and location.

Due to the in-game hazards, the average player will likely lose many ships and die many times during their No Man's Sky journey. The universe is by definition a dangerous place.

To paraphrase Sony's PS4 blog: No Man's Sky is built on this concept of absolute freedom, but the team at Hello Games want you to feel the constant challenge of survival as you journey between stars. Wade out into the wilderness for too long and your suit's protections fail, and your health slowly drops until a black screen announces your untimely demise. [1]