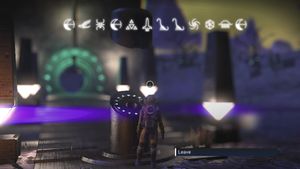 A Portal address describes the location of a Portal.

A Portal address is a character string that describes the location of a Portal when using the portal coordinates system. Every planet and moon has exactly one portal on them and every portal has its own unique address. When an address is entered into a charged portal the charged portal establishes a wormhole to the portal at the entered address, allowing for two-way travel through the portal. A portal address is a necessary component of portal travel, which allows for visiting any planet in the galaxy.

A portal's address can be learned by interacting with a charged Portal Terminal and requesting it. Alternatively they can be extrapolated by converting the coordinates given by a Signal Booster. The only difference between the two methods is that the first yields the address of a portal on a specific body in the system, whereas code conversion yields the general address of the star system without a fixed Planet Index. 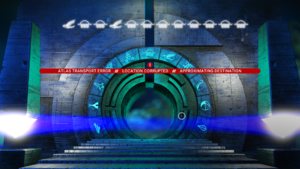 A portal address is a string of twelve glyph characters. Just as an Earth address details streets and cities, a portal address details planets, star systems, and regions of space within a galaxy. Reading from left to right, the first character in a portal address is the Planet Index and it is the address for a specific planet or moon within the given star system. The next three characters combine as the Solar System Index, giving the address for a specific star system within the given region. The final characters combine as the Voxel position, which is the specific address for a region in a galaxy. The Voxel position can be further broken into Y, Z, and X coordinates with its eight characters representing height-width-length, YY-ZZZ-XXX (see Voxel Position section, below).

It is not necessary to have discovered all sixteen glyphs to use a portal for travel. Some addresses require only a few glyphs. The benefit to discovering all the glyphs is to have unlimited options. 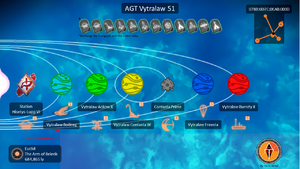 A Planet Index is assigned to each celestial body according to their aphelion in relation to the entry point of the warp drive. Unless a system is uncharted this spot is always marked by the local space station. Due to the moons' aphelion being larger than their local planet's, their planet indexes are higher, with the moon closer to the planet coming first.

Locations outside the gravity well of a planet or moon use PlanetIndex=0. If this specific planet index is used inside a portal address, the Atlas Interface will correct the destination and send you to the first planet (with PlanetIndex=1). The same happens for values above the number of celestial bodies in a system. While there are sixteen possible values (0 to F) the limit for celestial bodies in No Man's Sky is PlanetIndex=6. This can range from two planets with two moons each to six planets overall.

A visual explanation of XYZ numbering

Galaxies are oblong cuboids with a radius of 819.000 light-years and a height of 51.000 light-years. They have equal length and width but less than equal height and do not fall into perfect angles, at least visually. Based on those figures the proportions of each region are roughly 400ly x 400 ly x 400 ly (565 ly for a plane's diagonal and 695 ly for the cube's diagonal). A galaxy's portal network has a radius of 2048 regions and a height of 128 regions.

Galaxies can be divided into upper and lower halves with the dividing plane being called the "Galactic Plane". They can also be divided into north and south halves as well as west and east halves. These divisions provide a virtual compass rose for the galaxy. The cardinal directions, traveling clockwise around the compass, are north, beta, east, delta, south, gamma, west, and alpha. The termination points for the cardinal points are called "poles" and for the ordinal points are called "spirals". The extreme upper wall is the "Majoris" and the extreme lower wall is the "Minoris".

The portal coordinates system places its origin (where X, Y, Z = 0) at the centre of each galaxy. The X-axis is length, the Y-axis is height, and the Z-axis is width. Note that the Galaxy Centre is devoid of stars for 3,000 light years in all directions, which constitues approximately 7 axial and 4 diagonal voxels. The nearest reliable address to the centre of every galaxy needs 6 glyphs, but warping is disabled past portals as of Update 1.58.
100104005005

Y values begin at 01 and end at FF. They increase in the upper direction beginning from centre. When the upper pole is reached at Y=7F then numbering resumes from the southern pole with Y=81 and increasing as it nears centre. The coordinate Y=80 is the border between the edges in the portal network and it is not used. Entering it as part of an address will return the Y=81 result instead.
Up: 00 - 7F
Down: FF - 81

X values begin at 001 and end at FFF. They increase in the eastern direction beginning from centre. When the eastern pole is reached at X=7FF then numbering resumes from the western pole with X=801 and increasing as it nears centre. The coordinate X=800 is the border between edges in the portal network and it is not used. Entering it as part of an address will return the X=801 result instead.
Right: 000 - 7FF
Left: FFF - 801

Z values begin at 001 and end at FFF. They increase in the southern direction beginning from centre. When the southern pole is reached at Z=7FF then numbering resumes from the northern pole with Z=801 and increasing as it nears centre. The coordinate X=800 is the border between edges in the portal network and it is not used. Entering it as part of an address will return the X=801 result instead.
South: 000 - 7FF
North: FFF - 801

The Galactic Coordinate system uses Alpha Minoris for its zero point, where 0000:0000:0000:0000 begins. Their values begin at the bottom northwest corner of the chart and end at the top southeast corner, at Delta Majoris, where it ends at 0FFE:00FE:0FFE:0000. Just as the glyph sequence jumps X=800, Y=80, and Z=800 as the edge of the portal network, the same detail or 0FFF:00FF:0FFF:0000 is left out for the coordinate system to match the galaxy's dimensions.

The following table lists addresses for star systems that are at the extreme points in every galaxy. The addresses might result in error proximity teleports, but they do the job and are easy to remember.