Potkinoo-Azan Erod is a planet in No Man's Sky.

It is a Sub-zero planet with very low temperatures and frequent snow storms. 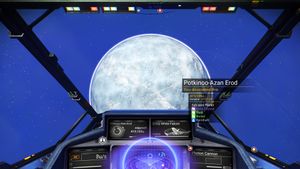 The resources on Potkinoo-Azan Erod are Numerous.

Zinc is particularly abundant, which helps with the protection system of the exo-suit against the hazardous cold conditions of this planet, as it is one of the minerals that can be used for its recharge.

In the other hand, Plutonium is extremely rare, and can be found mostly in caves. 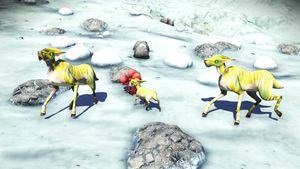 A family of the Genonumii Shop species

The fauna at Potkinoo-Azan Erod is Limited. Most species are of the Tetraceris genus, and from the seven discovered species, two are megafauna (more than 3m tall). The last three species has been elusive to our scholars, as are yet to be found.

The discovered species are: 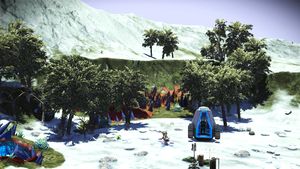 Although the flora of Potkinoo-Azan Erod is identified in scans as Nonexistent, this planet has a good quantity of big trees and frequent small forests.

Frostwort can be found or grown on this biome, and its byproduct Frost Crystal can be used in crafting several products and technologies. 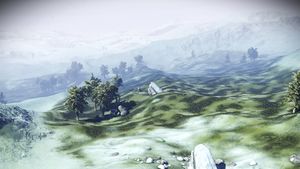 Features of the terrain of this planet

Potkinoo-Azan Erod is a rocky planet covered in snow and small stones. It features long plains, mountains and pits.

This planet also has long cave systems that can protect the travellers from its cold climate. 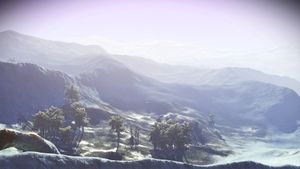 The misty environment of Potkinoo-Azan Erod

The low temperatures of Potkinoo-Azan Erod makes its environment covered with cold mist. It also produces frequent snow storms and the temperatures levels descend even more to dangerous conditions, depleting the life support systems of the exosuit at an accelerated pace.

During the day, the skies of this planet have a light blue hue and at night, the skies takes the characteristic dark blue color of this system.