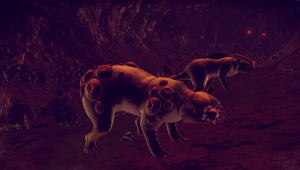 An unknown species of subterranean Procavya, one rodent-like (background) and one a mixture of rodent & mole characteristics (foreground).
(Foundation)

Procavya is a genus of fauna in No Man's Sky.

Procavya species can resemble a wide range of Earth organisms, including rodents (the common name used by the game code), moles particularly star nosed moles, reptiles, and more. They are related to, but separate from, the Procavaquatica genus, which is the genus for swimming fauna which resemble the Procavya genus.

Procavya species can be found on land, including in caves.

If presented with a creature that one cannot tell if it is of the Procavya or Theroma genera, here are some tips to differentiate: