From No Man's Sky Wiki
(Redirected from Procedural Generation)
Jump to: navigation, search 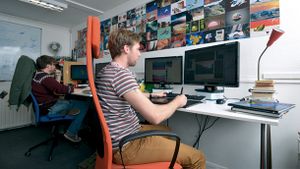 No Man's Sky is a game built on procedural generation; that is, each planet, creature, ship, multi-tool and other items are created procedurally using algorithms in the game itself, rendering diversity through each item created. The following is taken from Wikipedia.

What is Procedural Generation?[edit | edit source]

The term procedural refers to the process that computes a particular function. Fractals, an example of procedural generation, express this concept, around which a whole body of mathematics—fractal geometry—has evolved. Commonplace procedural content includes textures and meshes. Sound is often procedurally generated as well and has applications in both speech synthesis as well as music. It has been used to create compositions in various genres of electronic music by artists such as Brian Eno who popularized the term "generative music".

While software developers have applied procedural generation techniques for years, few products have employed this approach extensively. Procedurally generated elements have appeared in earlier video games: The Elder Scrolls II: Daggerfall takes place on a mostly procedurally generated world, giving a world roughly twice the actual size of the British Isles. Soldier of Fortune from Raven Software uses simple routines to detail enemy models, while its sequel featured a randomly-generated level mode. Avalanche Studios employed procedural generation to create a large and varied group of tropical islands in great detail for Just Cause. "No Man's Sky," a game being developed by games studio Hello Games is all based upon Procedurally generated elements.

The player's starting starship as of Beyond, Radiant Pillar BC1, is actually procedurally generated. It is always the same due to it being generated immediately on the start of a world, and the IGS (In-Game Seed) is always the same. The IGS differs from the LSS (Local System Seed) in that the LSS is essentially the system's RNG algorithm, whereas the IGS is run by the game itself.