Qitand-Bal Manyur is a star system in No Man's Sky.

Qitand-Bal Manyur is a star system in the No Man's Sky universe.

It has been colonized by The Qitanian Empire.

After the Beyond update, the star system got wiped from the PS4 galaxy map and could only be accessed via teleporter. Attempts to reach it by portal resulted in players spawning in random systems in the same region. Reaching the system by warping became impossible due to its invisibility on the galaxy map. 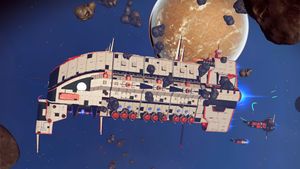