Quao-Iyl is a procedurally generated planet in the universe of No Man's Sky. It can be seen in both the "I've Seen Things" trailer and in "The Art of No Man's Sky". There are large snake-like rock formations, as well as large egg-shaped nodules similar to those found on Habik-Ogan. 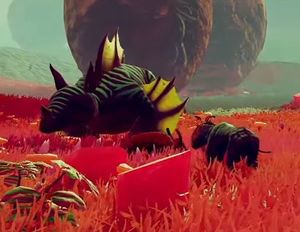 Grass and trees have red foliage. There are also plants with red and green striped leaves, and yellow mushrooms.

A creature similar to a rhino, but with additional spikes. On the sides and top of the creature these spikes are connected by a yellow web, similar to the feet on a duck. This is referred to as a "sailback".