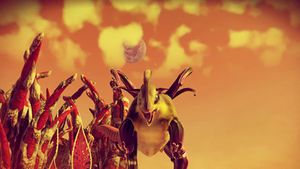 The Quuskala seconds before striking.

This predatory T-Rex/Tyranocae is notable for its rare gelatinous/slimy arms, legs, and tentacle-like protrusions from its back. In other characteristics, it resembles a large squirrel-like mammal. Most of its body appears to be scales or leathery, but its tail appears to be more like mammal skin. Green, compound (fly-like) eyes. It's a vicious species which will pursue both its prey and any travelers ruthlessly, and should be considered a danger even by more experienced exozoologists. Observe with caution.

The only extensively documented similar species is Cormit Netacit, a smaller, passive species. However, many pictures of other "slime-armed" t-rex species have been shared.

It can also be seen in this YouTube video and under more dangerous circumstances in this video.